The equestrian enterprise Menorca a Cavall was founded in the 2013. Its main aim is to carry out equestrian routes in the island of Menorca. It did not start its breeding activity of Purebred Menorca specimens until 2020, when they decided to focus their efforts towards this breed due to its versatility and because they liked the idea of promoting the    equine native breed of the island.

At the stud, the animals are mainly used for excursions throughout the year, for the participation in the patronal feasts of the island during the summer period and for breeding animals of high quality. 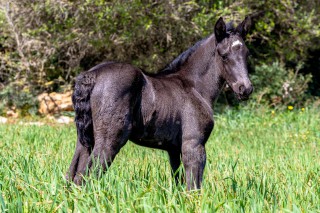 The specimens raised during those years stand out for its good character and beauty. Those are the main selection criteria taken into account when planning the mattings in this stud, always trying to improve, year by year, the quality of their products according to a good selection of the specimens used as breeding males and females. So, Menorca a Cavall gives prominence to their own daily experience at the field with the animals of the stud and to the results obtained for the specimens at the official morphological contests of the Breed.

More information about this stud can be found here: www.menorcaacavall.com